I am just returning home from Day 2 of our Maatla All Partner meetings which are being held at Mokolodi Game Preserve. After two days I feel like there are some things that I genuinely need to get off my chest and to point out what have been some of the occupational hazards of the last couple of days.

First, as I have now noted a couple of times the meetings are being held at a Game Preserve which means you need to load into safari vehicles in order to be transported to the conference centre which is at the top of a very large hill in a remote area of the game park. Day 1 Agenda clearly indicated that business attire was necessary as we engaging in discussions with outside partners, particular Ministry. Now, I am a rather practical person – don’t anyone dare comment!!!!

I chose to wear a business pant suit and very sensible flat shoes. However, the vast majority of the women in attendance showed up in not only dresses, but high heels as well. I wish that I had brought my camera with me so I could actually document the loading and off-loading of the safari vehicles. In some cases the heels came off and the ladders were climbed in bare feet; in others, the women simply gingerly ascended and descended in their heels and skirts. It just goes to show that attire is taken very seriously here. There is simply no casual dressing for work or work related functions. I have worked for Cabinet Ministers, Premiers, and Prime Ministers. I think that I have always dressed very well and professionally but let me tell you Botswana has taught me a thing or two about dress codes.

The second occupational hazard encountered was during our deliberations yesterday morning there were approximately 65 people in the conference room so two of the doors were left open to reveal both the specular view of the hills and game preserve but to also allow air and people flow. It would seem that our topic of discussion was of interest to others as at about 11 am a baboon presented himself in the open door to check us out. The poor lady who was seated closest to that door was clearly apprehensive that she might have rather intimate contact with the baboon. Fortunately once it discovered that we were actually discussing rather boring issues of HIV and AIDS it chose to leave.

My additional encounter with the lovely wildlife of Mokolodi came today as I made a visit to the ladies room. It would appear that not all wildlife at the park have been taught to read. In fact I had to share my use of the toilet with the largest insect that I think I have ever seen and I am pretty certain it was not a female either! Yet my adaptation to Africa is still going well. I was able to do what I needed to do and depart the stall without creating any type of conflict. Which was a relief in so many ways!!!

And my last observation dealing with occupational hazards came this afternoon as we were discussing statistics/trends including male circumcision. It was noted that one of the reasons that uptake on the program is low are myths that are discouraging men from the procedure. A new one that I learned about was that there are those who believe that the foreskin which is removed is sent to America and used to make belts or shoes….yes, you read that right. As my friend who just had his removed last week sat next me during this meeting was razed that his was now being made into goods, I put in my order for a new belt!!!!! There is nothing else that I can add to that….

In closing, I want to note that my friend Erin (fellow ODA and Gender Advisor) and I were able to open the meeting this morning with a prayer of remembrance for December 6th. Every meeting here starts with a prayer and we took the opportunity to use this ritual to commemorate the women who have lost their lives or live in fear of violence. Just further proof that no matter where you are, you can make a difference. As I chaired a session this afternoon on Gender Integration and Mainstreaming I had a difficult time controlling the discussion as those participating were passionate, articulate and committed to change. As a result we brought forward a clear recommendation for addressing the issues and effecting change as part of the Maatla Project. A good afternoon’s work on a very symbolic day! 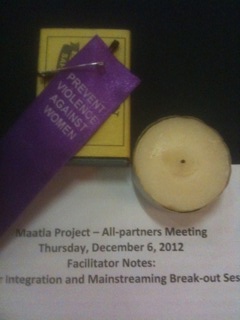