I woke up my first morning in Stone Town to the noise of the streets below me coming alive. The sounds were like music to my ears – the call to prayer at the Mosque, street sweepers, men opening their shops or setting about their daily routines.

As my hotel room was right over the street, I had an intimate view of the street as it came to life for another day. Reimenscent of my apartment in Paris, which had huge windows and shutters covering them so the room was blissfully darkened, I had actually slept later than I anticipated. Although I had gone to bed only a few short hours ago I had slept deeply and was now wide awake and ready to explore all the town had to offer. So after a shower and quickly connecting to email so I could let my parents know that I was safely on the second part of my vacation, I set out without my guide to begin exploring.

Yes, I know! I had hired a guide to take me on a walking tour of Stone Town so he could help me learn to navigate the labyrinth of twisting narrow streets without becoming hopelessly lost. I had asked him to come for me at 12 noon so that I had time to rest and check in with people back home. However it typical Cheryl fashion, I was eager to be out and about. So after greeting the staff on the front desk and the porters at the door I struck out to explore and easily found my way down the street to the waterfront and Forodhani Gardens, a beautiful park.

I was later to learn from some of my new friends that this park was recently updated by the Aga Khan and it really is a jewel in the city. During the day it is a beautiful place to rest comfortably under the shade of trees or sit and watch the dhows (the local sail boats) float by. At night it is a chaotic, colourful night market where you can eat your fill of Zanzibari or Swahili food. Oh but I am getting ahead of myself again!!!

First things first. After visiting the park it was time to take the five minute walk back to my hotel to meet my guide and officially explore the city. As it turned out, he was temporarily delayed and had someone else to meet me. After ascertaining that he would be along in an hour I had the new guide show me to one of the central shopping streets so I could have a look around while waiting for my guide. It was during this shopping expedition that I purchased my famous bright pink and white scarf to shield my shoulders and bare arms from the sun. This purchase it seemed turned me into a local!

Not only had I truly bargained to secure it at a fantastic price – in fact I felt sorry for the shopkeeper who obviously didn’t make any profit off of me- but it made me look like a local. As I wandered the maze of streets later that afternoon with my guide, many of the older women sitting outside of homes and shops commented that I looked like a local. And I had only been in the city for less than 24 hours, not bad!  This scarf came everywhere with me during my stay in Stone Town and because of the colour it herald my arrival on the streets.

When my hired guide finally caught up with me we set out on our walking tour of the city. He was a little shocked to learn that I had already covered a fair portion of the town on my own and without a map. He really had a lot to learn! Right Dad? I haven’t met a city that I haven’t been able to find my way around once I put my mind to it.

First, we went to the Old Fort which is situated right below my hotel and it is where I had spent the previous night dancing. See, due to the festive season there was nightly live music in the Old Fort.

The Old Fort was built around 1700 by Seyyid Said’s grandfather on the site of a Portuguese church from 1600. It was used by the Arabs to repel the Portuguese and their allies the Mazruis, who occupied Mombasa. In the 19th Century the fort was used as a prison and a place of execution. In the beginning of this century it became a depot for the Bububu Railway Line. The old fort is now a cultural centre where there are classes in drumming, henna painting, Zanzibar cooking and there are drama and music performances in the open air theatre. There are many shops and a restaurant inside and at night there are often Taarab, Ngoma (local styles of music and dance) or movie nights. 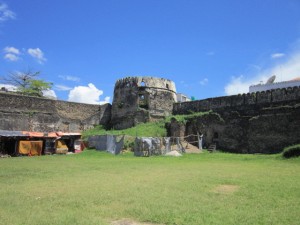 Inside the Old Fort

This is where I danced two nights in a row! A girl needs to have fun, doesn’t she?

The tour continued on to the waterfront park where sadly, I had also been earlier in the day. My poor guide 😉

Sultan Barghash built the Beit el Ajaib (or “House of Wonders” in Arabic – so called because it was the first building in Zanzibar to have electric lighting and a lift, and because it was very tall and filled with beautiful artefacts).

It was built in 1883 as a ceremonial palace, on the site of a former building used by Queen Fatuma of the Al Alawi rulers who preceded the Albusaidis. The door from this former palace is the oldest in Zanzibar and dates from 1694. It is now in the Peace Memorial Museum.

In 1896 the building was slightly damaged during the “Shortest War in History”, the British Bombardment of Zanzibar. After the turn of the century the British used the building for their local offices until the revolution of 1964. In 1977 the CCM (Chapa Cha Mapinduzi, Swahili for ‘the Party of the Revolution’) made the House of Wonders their headquarters. The building has been restored and is now a Museum.

So the tour continued on through the maze of twisting narrow streets where the sound of hawkers, motorbikes and mopeds echoed off the paving stones and buildings. It was wonderful, just like I was back in the Marrakesh Souk.

After a brief stop at a Kanga store that I simply could not pass – I told you it is an addiction! I love fabrics and the dizzying array of colours and prints of a Kanga shop were a dream.

After purchasing a couple as presents! Off we went again. This time ending up in the Market area. The Old Market in Stone Town actually consists of several markets all group together, fruit, meat, fish and spices. The market buildings were erected by the British during their protectorate of Zanzibar.

The only market that I was not allowed to take pictures in was the Fish Market. While we were able to walk through, I was told not to take pictures while in there. No one would tell me why not. As well, I had to be careful taking pictures throughout the market areas as very few sellers wanted their pictures taken and I can’t say as I blame them. I hate having mine taken.

Next on our sites was the site of the former Slave Market which is now the Anglican Cathedral Church of Christ.

The Anglican Cathedral’s altar stands on the location of the whipping post from the island’s largest slave market. There is a cross made from the tree beneath which Livingstone’s heart was buried, at Chitambo where he died. The Cathedral was built in 1873 by Edward Steere, Third Bishop of Zanzibar, reigned 1874 to 1882. When he died of a heart attack in the building next door, he was buried behind the altar. The Cathedral took exactly 10 years to build and its strange barrel vault roof was Steere’s own peculiar invention and though the population of Zanzibar were convinced that it would never hold, it still stands today.

David Livingstone was a Scottish explorer and missionary who was also instrumental in the abolition of the slave trade.

Located next to the Church down cold twisting steps are the two holding cells for slaves waiting to be auctioned off at the slave market every three days. I can not possibly imagine how they were stacked into these two chambers and held there for three days at a time. Although the worst was really yet to come for those sold as slaves. This part of the tour really disturbed me although we are all aware of how horrible the slave trade was, it was sickening to see where they were auctioned off. I also learned how some of the Tribal Heads actually sold their own tribe members for money or other goods.

I could barely stand in this space and I am less than 5′ 3. Imagine having thirty or more people crammed into the space for days at a time. Those tiny slits in the wall were the only light and air that could get into the space.

It was truly heartbreaking to go into these spaces.

After finishing here, we ended the tour of Stone Town in front of Mercury House, the birthplace of Freddie Mercury, the lead vocalist of the famous British rock band, Queen.