One would think that after such a busy full day yesterday that I would have the right to be a bit lazy but no pole pole for me! Once again waking to the sounds of the street below me coming alive for the day I was eager to get up and ready to head out on my arranged tour of a Spice Plantation.

I was being picked up at 9 am so after a quick breakfast of some of the fruit that I had purchased the night before and a shower I was ready to go. I still had time before my pick up so I headed where else but down to the waterfront and Forodhani Gardens. Having grown up on the north coast of Prince Edward Island I sincerely believe that it is in my genetic make up that I am drawn to the ocean. Living in land locked Botswana does not afford any access to ocean, although I have had great access to bodies of water such as the Chobe River and Gaborone Dam.

Starting the day by sitting on the water’s edge watching the dhows sail by was the perfect start to my Christmas day. The dhows are the traditional sail boats that are constructed out of wood and have either one or two sails. They are so graceful to watch as they glide along the ocean carrying passengers, cargo or fishing.

After breathing in the sea air, I made the return five minute back up the street to my hotel. I was then picked up not by my guide but by his brother who was a private taxi driver. He explained to me that his brother was busy and that he would just take me and drop me off at the plantation where there would be a guide to take me around.

So off we set. As it turned out part of the route that we took to the spice plantation was the same route that I had travelled the night before on the dala dala. It was interesting to see it in the day time but it certainly didn’t have the same thrill for many different reasons.

Once we turned off of the main highway we turned on a road that started to show me just how lush and green the island of Zanzibar truly is. Unlike Botswana that is certainly greener now than when I first arrived, everywhere I looked on the drive all I could see was a sea of green. Lush full trees of some many varying kinds, shrubs, bushes, grasses. There was green for as far as your eye could see. There were also lots of Brahma bulls.

Yes, I am a cow girl. I grew up on a dairy farmer and seeing cows and/or bulls just makes me happy. My cousins David and Bob Hooper who are dairy farmers in Milton, PEI assured me before I left that I would most likely see Holstein cows in Africa. They even rhymed off Tanzania as a place that they were sure that holstein cows had been sold to. Well, of course they were right. I did in fact see a couple of holsteins and others who looked like a wonderful mix of holstein and brahma.

Brahma bulls are distinctive as they have a very noticeable hump over the top of their shoulders and neck which is useful when they are hitched to hauling a load which is exactly what they are used for in Zanzibar. Every where I went outside of the town centre I saw bulls either grazing by the road side or working like this one. Sometimes the loads that they were hauling were astounding for an animal their size.

The drive to the Spice Plantation was fascinating and I was eagerly anticipating my tour. Upon arrival I was greeted by my guide at site that did not have any buildings at all except for a simple lean to in the centre of a clearing.  Not one to have a lot of expectations, I do have to admit that I was surprised by the Spice Plantation. It was simply a very green space with some men milling around. I guess that I was expecting an actual farm when in fact it was simply an agricultural area that had been planted by the government.

It was a little like our concept of experimental farms that we had back home in Canada. My guide explained to me that the government had initially planted all varieties here in  order to monitor and record the success rate of various spices and fruit plants. So for the next two hours I walked around the plantation with my guide and his assistant who I claimed did all of the hard work. You see he was the one who climbed the trees to get down fruit or bark to show me. He was constantly going ahead of us to dig up a root of a particular plant or to prepare the next site. He also made me numerous presents which he continued to present me with throughout the tour. While I realized that this was the common practice for all tourists I did note that I certainly had a wide array of presents than any of the others that I encountered during our walk.

This was my bounty

I had a basket made from banana leaves, a crown with flowers, a frog necklace, a bracelet and a ring. When the ring was presented to me, I jokingly said that now we were married and he grinned at that. No doubt that is why I got the full scope of presents throughout the tour. Unfortunately, I forgot the ring at the plantation as I took it off to wash my hands and forgot to put it back on. But maybe that happened because of my aversion to being married! But here is proof that it existed: 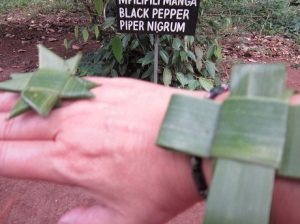 And here is what the maker looked like, albeit he is up a tree

Okay,  now you are going to kill me! Because I took a ton of pictures but I can’t remember what everything was!!!! This was a very organic tour meaning that we simply moved around from one bush, tree or plant to the next. There were some signs which I took pictures of but often there was no identifying signs. I listened intently to everything that he told me but I didn’t write anything down, of course.

So now you get to see the pictures and gold stars to anyone who can correctly identify any of the ones not identified. Perhaps some of my new friends from Zanzibar will help me out when they read this blog post and provide the correct names for some of the pictures.

Sorry but here we go!

Doing better than I thought I would – aren’t you proud of me?

okay, I am going to stop posting the ones that I can’t identify but I hope that you get to enjoy this wonderful video that I took of someone scaling a extremely tall coconut tree just for me. I loved the song that he sang, have a listen to it on  http://youtu.be/hIqLy5Zda90