While the landlady is away, the landlord comes out to play. As the always classy and regal Honorary Consul is jetting off to visit family in far off lands, there is no one here to keep evil prankster Peter in line.

Although Jetske had only be gone for a total of 24 hours yesterday afternoon, I returned to my apartment to find my private terraced adorned with the sign pictured above. One can only conjecture what the true intent for its temporary placement was. Previous experience with the prankster makes me believe that it was an indication that anyone entering Bird Cottage (Apartment #2) needed to beware of the evil beast that lives within 🙂

Because Dottie could never be considered to be the evil beast, although the other night she threw herself at my closed door with such force I thought that I was being visited by a baboon.

Clearly, I need to reciprocate Peter’s efforts and don’t worry as I have plenty of time to do so as Jetske is out of country for another week. I am sure that the next week will be full of one up-manship and there are no safe bets as to who the winner might be.

Having Jetske away also means that I have even more constant companionship from my four legged friends. As noted above, Dottie has been forcibly knocking on my door in the evening. My friend Gabby also believes in lots of togetherness as evidenced by this picture. 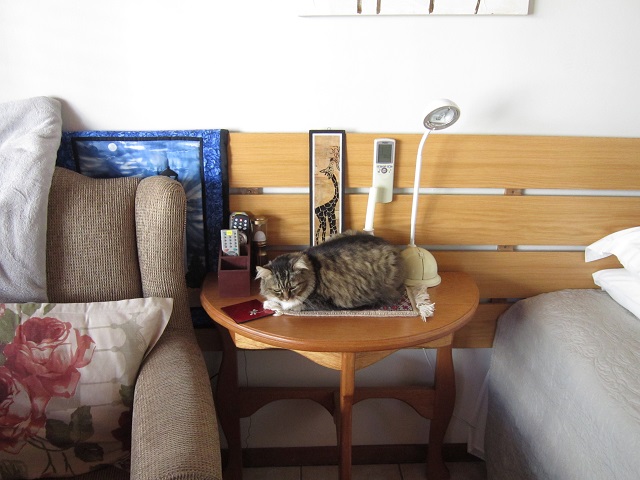 Let’s hope that whoever takes up residence in Bird Cottage after me won’t mind sharing the tiny space….perhaps I need to leave a note instructing them when I depart Peter’s Place to never leave the windows open as intruders have been known to sneak through very tiny cracks.

2 thoughts on “Mischief at Peter’s Place”